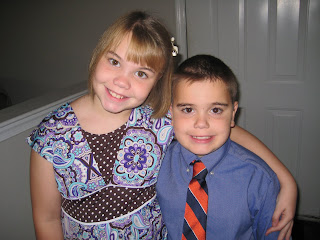 Yesterday was picture day at school.

Resentment is a crappy, crappy thing.

My husband has been home from a TDY less than a half hour and we already had a fight.

I felt like he was yelling for no good reason. But it all ended when I said, "Don't worry, I'll take care of everything. Just like I always do."

What a crappy thing to say.

He went upstairs without a word.

Sometimes I feel like a failure as a military wife.

I drove my husband to work this morning so that I could pick him up after work and not leave his car stranded. He had his promotion party this afternoon.

So, as we were driving across the bridge this morning, my dear, dear husband said, (and I quote, for the record!) "I can't wait to retire."

It was his plan when we moved here to do whatever it takes to stay put and retire here. He says things like, "My family is more important than my career." And, "I love it here." Jesus, just last week he was wondering how everyone would react if he kissed the kids' new headmaster on the mouth. That's how much he loves the kids' new school. (We all do.)

But around lunchtime I got an e-mail from him saying, "We need to talk!"

When a military husband e-mails home those four words, it is never good.

But we never connected before his party. And by the time the kids and I got to his party he was slurring drunk. Slurring and happy drunk.

Once we got home and got the kids to bed, and had ice cream, he wanted to talk. He got a few e-mails today. They were asking him to come work deputy positions in North Florida. Which would hopefully lead to commanding positions, most likely in glorious places like Alabama, North Dakota or Louisiana. He also found out he is eligible to put in for a command position.

So he went from, "I can't wait to retire," this morning to "I want to be a commander," this afternoon.

Oh, oh oh! Never mind that just this morning I asked him why he didn't get selected for a certain something and he told me that he chose to spend his time with us before a deployment over studying for the required tests. He insisted it was a good choice that he had freely made.

We can't stay here if he really wants to push his career. If he pushes to be a commander, we'll move a lot. A lot.

He wants to know what I think.

I don't know what to tell him.

I want him to be happy. Faced with the reality of fulfilling the dream he's had since he was...oh...about 19, he can't pass it up. He's too proud to tell people he just wants to quietly play out the last few years of his career for his family's sake. The allure of finally having the chance to be in charge, run things his own way, and probably get promoted to colonel is just too irresistible to resist.

I don't want him to regret not going for it.

I don't want to move to a place where I'd have to put the kids in public or church school. Where I can't even find a violin teacher. Where we've lived before and know we don't love.

He asked me, "What would you do if you were me?"

I can't answer that.

I am a woman who gave up a very promising career to marry a military man. I've sacrificed a lot to give my children everything I thought they needed. I love being "just a housewife" and a stay-at-home-mom, but it has come at a personal price.

When it comes right down to it, at the very core of me is the instinct to sacrifice myself for the sake of those I love. That's not good or bad. It just is.

Without him there would be no violin lessons, private school or stay-at-home mom, because we wouldn't be able to afford it.

So he joked, "Maybe I'll be divorced by then and I can just go on my own."

And I told him, "We shouldn't talk about this while you're drunk."

But he insisted he was sober. And he went on to suggest that maybe we could just live apart for a few years.

I maintain that no school can trump having a loving father in your life. He maintains that a great education is more important than anything he can give them.

I just don't know. Two years ago when he was in Iraq he was ready to get out of the service. I think is his excitement over advancement he has forgotten just how miserable he was. We'd be moving to the armpit of America again only to be separated from him for six months out of every eighteen.

I have no answers for him. I don't know what to say. He knew this decision was coming, I just don't think he thought enough about how he was going to feel about it.

I've always taken the same stand when these kinds of decision come up. I tell him, "Do what you need to do. We'll be fine. I'll make it work."

It's the stoic answer. The strong one.

I'm not sure how much strength I have left.
Posted by Tuna Girl at 11:53 PM No comments:

Today my husband found out that he's getting promoted to Lt Col.

He brought me home roses and congratulated me on "our" promotion. How sweet is that?

Doesn't seem very Lt Col-like to me.
Posted by Tuna Girl at 11:19 PM No comments:

The Mouthes of Babes

A friend and I were expounding on and on about money and the haves vs. the have-nots when I spouted off, "Money makes the world go 'round!"

Overhearing this, my son felt the need to object. "Money doesn't make the world go 'round."

"What does make the world go 'round, buddy?" I asked him.

And he answered simply and matter-of-factly, "Love."

My friend and I then fell into the black hole of his sweetness.
Posted by Tuna Girl at 8:28 AM No comments:

No Yarn in This House

A new friend asked me this quite casually the other day.

Assuming that she was asking because she is a homeschooling proponent, I curbed my instinct to cry out, "Oh, dear GOD NO!!!"

I've always known a lot of homeschooling families because so many of them are involved with Suzuki violin. I don't think it is fair to categorize them all in one fell swoop (although I'm probably guilty of doing exactly that). I've known a couple of really great homeschooled kids. And I've known a couple of nutso ones. But like any group of people, most of them have at least something in common, or they wouldn't be a group.

Homeschool kids all have one thing in common. Homeschool moms.

I am so not a homeschool mom.

And as I talked to my new friend about her plan to try homeschooling her five-year-old, I pretty much said just that.

"I think there are probably a lot of great things about homeschooling, but I know that I couldn't handle it."

There is no way in hell I could handle it.

I think homeschool moms tend to be more "supermoms" than most others. And that is neither positive or negative. It just is.

I am so not a supermom.

The list of supermom things that I don't do could line the dog's pee place for a year!

Plus, I do do a lot of things that a supermom would never do. (Like write "do do"!)

About the only supermom-type thing that I do is insist that my kids use good manners.

So, I have to wonder, why would my new friend mistake me for a homeschool mom?

And is that a good thing or a bad thing?

I do have to admit though, that I often wish I could be more supermom. Oh, not the vegan, crafting, moony kind. But the patient kind. The kind who does "projects" and doesn't send the kids out to play so she can watch an old CSI:NY on TiVo.

I need to show my kids more love. Without getting all moony about it. Because that is just not my style.
Posted by Tuna Girl at 9:21 AM No comments:

Old Men and Their Toys

In all of the fervor of Back to School (my most favorite holiday of the year!) I forgot to mention my dear husband's birthday.

The old man turned 37 yesterday. Damn, how did I end up married to someone so old?

Buying gifts for my husband is one of the fucking hardest things in the world to do. Why is it so hard to buy gifts for men? Oh, that's right. Because they're all incommunicative bastards who won't answer a simple question like, "What would you like for your birthday?"

As he put it, "It is more fun and meaningful to see what you come up with on your own."

This makes me feel like he’s just setting me up to fail.

Considering that what he really wants is new rims for his car, I didn't have a snowball's chance in hell.

So I did what I always do when I have no idea what to buy him. I throw a bunch of shit on the wall and see what sticks. If I buy him six or seven gifts, at least one of them will be acceptable, right?

For our anniversary I got him a small wine fridge and a pretty decent bottle of wine. For his birthday I got him Swedish Fish, two different clip boards (for coaching), two books on goalkeeping, a humor book on coaching soccer (yes, I know he's not a big reader but he's almost finished with the second Harry Potter book and I want him to keep at it), brownies, a barbecue set with LED lights, and at the very last minute, Guitar Hero.

Guess which gift was a hit.

The good news is that while he struggles at Guitar Hero I get a sudden compulsion to practice the piano.

The next gift I'm buying him is a set of headphones.

Honestly, I am ecstatic to have this man in my life and (bonus!) home for his birthday. Happy birthday, Tuna Man! I love you.
Posted by Tuna Girl at 1:28 PM No comments: