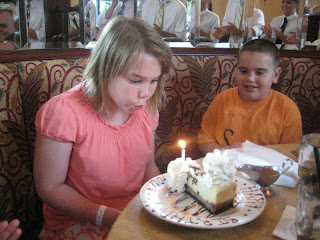 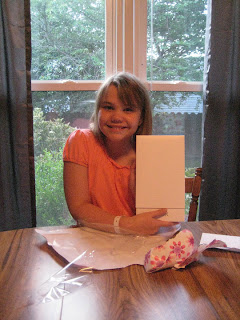 Thanks to her grandparents, my daughter is in the running for Most Spoiled Child Ever.
My kid has a cell phone, an iPod, a digital camera, a Flip video camera, and a nook e-reader. She has a freaking e-reader! I don't even have an e-reader.
But she is the first grandchild in our families. And the only girl. And her grandparents spoil her rotten. Admittedly, Santa brought her the cell phone and iPod bought she doesn't even use those.
In addition to the Flip and nook, her grandparents also sent her two pairs of gold earrings, a $100 Barnes & Noble gift card (for e-books), and a grand.
Yup! A grand! A thousand dollars. Her savings account is now bigger than ours.
And what did we, her loving parents, get her for her birthday? A subscription to American Girl magazine, a reading lamp, and decorative turtles for her wall. Yes, turtles.
Okay, sure, I can go on and on about the stuff she has that I don't, but I have to admit that she is really very appreciative of everything she has. She is a very good present receiver.
Still, that kid is NOT getting a MacBook, and iPhone, or an iPad before me. And she's getting nothing but socks and underwear for Christmas. I swear.
Posted by Tuna Girl at 11:34 PM No comments:

Catching Up on Summer, Part 2

Speaking of hockey, my husband still plays. I try to take my kids to as many of his games as I can. This past week he got in a shoving match with a real asshole on the other team. It's funny, because I saw it coming. One of the player's wives was sitting next to us with her two kids under 2 and she was bragging to her friends about how many penalty minutes her husband has racked up and how many fights he's been in.
Yes, this is recreational hockey we are talking about. On a men's league with five teams. Some of the teams don't even have uniforms. It is a "no checking" league. But HER man is all important because he trips people and acts like an asshole.
I don't know if he realizes it, but my husband's protective streak goes way beyond his family. So I knew once this guy started acting out, my husband would be the one to put him in his place. Within the first minute, the guy rode him into a corner, elbowed him in the head (which I'm not even sure of my husband realized) and checked him. So he stood up to him. He's not going to let some guy get rough with him and then the rest of his team.
They both got sent to the box.
My kids were not happy with the situation.
By the end of the game the guy had gotten tossed out. It takes a lot to get tossed out of a recreational hockey game. His wife was proud though, so I guess that's something.
When we were waiting for my husband to come out of the locker room, the guy's baby was crying. My son asked me, "I wonder what that baby is saying when he cries."
And I replied, "He's wailing, 'My parents are bad people!'"
What? It just slipped out, I swear. I didn't mean to say it and I wasn't considering my audience. Don't worry though. My son chastised me.
So, other than that great bit of parenting, I've also sent the kids to two weeks of day camp at school. Last week my daughter took photography, which she loved. This week she is taking a babysitting course, which I love. Last week my son had art camp with a member of the Guggenheim family. This week he is taking a class on candy making with his best bud. Guess which one he likes best.
Next weekend my husband is taking the kids camping. In a tent. I'll be home in the air conditioning.
But today is my daughter's birthday. She's turning eleven. She's creeping on up there.
She's such a good kid, even though most of the time she is such a trial to me. (She's the kind of trial that makes me roll my eyes and sigh and laugh, but still a trial.) I'm finally starting to understand her a bit though, and that is huge for us. I think she's finally at an age that I remember being myself. I was a much bigger dork at eleven than she is. I thank classical music, a good school and sweet friends for that.
She has three best friends that do everything together. They are quite a crew. But one of the girls is definitely sweeter and more mature than the rest and luckily, she's the one my daughter thinks of as her best friend. We're taking her out to dinner with us tonight.
Oh, I bought Justin Bieber concert tickets for my daughter's birthday, thinking I would earn the title Coolest Mom Ever. But nope. A little probing taught me that apparently she doesn't like Justin Bieber and thinks his music is completely annoying crap. I guess I should have probed before I purchased. Now I have to decide if I want to sell the six tickets, or still give them to her and make her friends happy.
Decisions. Decisions.
All in all I have to say that we are extremely lucky. We're very proud of our daughter. She's a very special person. She's strong enough to play hockey but sweet enough to hover over the little kid who falls to the ice and starts crying. Now she wants to be a violin teacher or a preschool teacher when she grows up. But she still dreams of training dolphins and having awesome animal adventures. She loves kids and animals. And her brother and her dad.
She's growing up, and mostly not into that annoying preteen stage that we've been dreading. She is an awesome mix of mature and naive that works well for her. She never whines. (But she cries.) She wants to wear lip gloss and perfume. (But she doesn't want to wash her hair.) She is a complex mix of kid and grown up, but she is sweet and empathetic above all.
She's a musician. She's a real artist. And she is everything that entails.
And I love her.
Posted by Tuna Girl at 1:06 PM 11 comments:

Catching Up on Summer, Part 1

My son is at his friend's house. My husband is still not home from work. And my daughter is asleep on the sofa. I haven't felt this alone in months!
Every single summer I have these fantasies about enjoying an idilic summer full of beach days, art projects and popsicles. But the truth is I'm scared of the jelly fish at the beach, I suck at art projects, and popsicles make my teeth ache.
So I fill our summers with stuff. I never mean to. It just happens.
We started this summer with a trip to Washington D.C. for a summer violin institute. It's hard to explain what the institute is like. It is intense. It is one of those great experiences that teaches the kids that hard work has its own rewards. That fun doesn't have to be frivolous or silly. That enjoyment can come from immersing yourself in a challenge and exceeding your own expectations.
It's kind of like one intense week of college for young musicians. The kids work hard but have fun too in "play ins" and at the pool. I attend parent lectures while they have fun.
This particular institute is very competitive, but they're really not supposed to be that way. Imagine spending at entire week with the stage moms of 260 kids. My son wants to go back to the same institute next summer. My daughter wants to try another one. (Probably because she happened to fall into that place where she was at the top level of each of her classes and she didn't enjoy it. She even had orchestra with her baby brother. She's right on a cusp and that is no fun for a tween.)
Also this summer, we finally let our little princess talk us into letting her play ice hockey.
She's wanted to play for years but hockey is so expensive. It was also the one thing her brother did that she didn't do. It doesn't seem right that they both play violin, both are taking theater class, and both are joining the swim program at school. Don't they need their own things? We figured they could at lest have different sports.
Bu she kept asking to play hockey and she has to go with me to the rink for her brother's games and practices anyway, so it did kind of make sense to let her. A few grand later (and a pair of $350 ice skates!) and we have two hockey playing kids. They're even on the same team.
So much for having their own things.
I guess I have to remember that my kids are kind of weird in one key way. They really do enjoy each other's company. They really are very supportive of each other. It's like they totally missed out on the sibling rivalry gene. It's kind of weird. I hope it doesn't mess with their future development.
Even though she is way better than him, my son still loves to have his sister on his team. When she scored a goal last week, he was the one who announced it to us enthusiastically in the locker room after the game.
I don't know how long the ice hockey thing will last for a girl in a place where she has to play with 6 through 10 year olds this summer and then 11 through 18 year olds this fall, but we'll see.
Posted by Tuna Girl at 5:41 PM No comments: