And Pop Culture Comes in for the Win

In a month my daughter will turn 13-years-old.  (She was four-years-old when I started this blog.  That is seriously nuts.)

In some ways she has been acting like a typical 13-year-old since she was 3.  But in others she is strangely both very naive and very mature.

For example, she has never been even the slightest bit interested in pop culture.  And so she is kind of clueless about the things other girls her age are really into.  But she has been obsessed with things that many adults don't even understand.  Like Latin, classical music and Shakespeare.

She is so obsessed with Shakespeare that she memorizes soliloquies for fun.  She has read almost every play multiple times.  And she first reads the original text and then reads the annotated text just to get every nuance.  She writes Shakespeare fan fiction.  (I'm not saying it is good, but she writes it.)  And then she wants to talk about it all.  Obsessively.

When the first Sherlock Holmes movie with Robert Downey Jr. and Jude Law came out we thought she was too young to see it.  It was PG-13 after all.  I don't remember her even being aware of the movie.

But when the second movie came out last Christmas she was desperate to see it.  But my husband was home for his RandR and he took me to see it on a date night.

So after he went back to Qatar, I took her to see it one night while my son was sleeping over a friend's house.

Her first pop culture obsession was born.  Her first crush.  And it is on...

Never mind that as a child of the eighties I mostly think of Robert Downey Jr. as a drug addict and outlandish member of the Brat Pack.  And a convict.

But now I have a child who writes "I love Robert Downey Jr." in her notebooks and can't stop asking about when Iron Man 3 and Sherlock Holmes 3 will come out.  She even plays the music from the movies on the piano and violin.

Let me just reiterate that Robert Downey Jr. is 47-years-old.

Sherlock Holmes:  A Game of Shadows was released on Blu-Ray today.  Yes, I went right out and bought it.  And I am currently using it as a bribe to get her to actually clean her room

And it is working.

If you can't beat 'em...use 'em to your advantage.

And I'll enjoy Jude Law (who is my own age!) and the homoeroticism along the way. 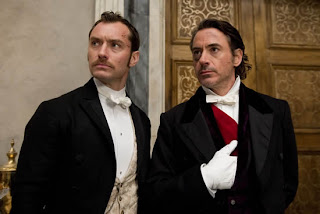