My Dog Hates Me

While the kids were busy being spoiled by my parents, my best friend was ruining my dog.

He spoiled her so very much. Every night when he came home from work, he would play Bonsai Buffy with her. This is a game that involves much pouncing and tossing and roughhousing. And when he tired her out, they'd curl up in bed together and go to sleep.

But every night on his way home from work he would call me on the phone and we'd chat to help keep him awake on his late night drive. So the dog got used to this. The phone rings. Mommy talks to Uncle Patrick for a while. And when she hangs up, Uncle Patrick is walking in the door and ready to play.

One night, Uncle Patrick didn't come home. (Uncle Patrick was busy roughhousing with someone else.) Poor Buffy stalked around the house again and again. She'd bark at his bed. Bark at the door. Bark at the phone. And then she'd start at the bed again.

I said to her, "Patrick isn't coming home tonight." But as soon as I got out the Pat, she went crazy. She barked all night until she wore herself out around 2 a.m.

And then I was the cruel mother and separated her from her true love. I can't say Patrick's name now without her going nuts. And now, every time the phone rings, she barks her head off and waits at the door for her beloved uncle.

I swear if I were single and childless, I just would have given him the dog. They obviously love each other more than I ever could.

But last night was the last straw. In a peacekeeping effort, I brought Buffy up on our bed and played Bonsai Buffy with her. But I must not play it right. Because after a few minutes, she squatted down over my arm and peed.

"I piss on your piddly efforts at playing Uncle Patrick's game," her eyes said to me.

The husband and I shot off the bed and she was quickly thrust into her kennel.

I wouldn't be surprised if she's started to think that her name is Little Shit. I call her that often enough.

If she pees on me again, she just might get shipped back to Uncle Patrick. I think they deserve one another.

Can't you just see the disdain in her eyes? 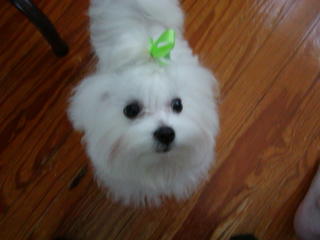 By the way, Buffy is doing fine but will have a liver biopsy next Thursday. Keep her in your thoughts, will you?. Traitor that she is, I still love her.
Posted by Tuna Girl at 1:49 PM