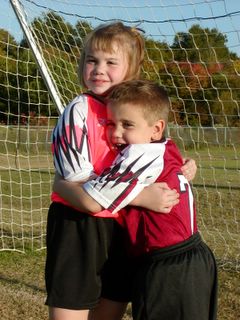 My daughter just completed her seventh season of soccer. She started playing four years ago, when she was barely four-years-old.

This weekend she scored her first goal ever. (In my mind, this one doesn't count.)

We're having a lot of fun with soccer this year. Both kids are playing on teams with their classmates. I've made very good friends with the other parents from my daughter's team. After every game we ask the kids two questions. "Did you have fun?" "Did you get good exercise!" We've never worried about goals.

But in the back of my mind, I was always thinking about how happy she'd be to finally score a goal.

I didn't even realize it, but their record was 10 wins and 1 loss. For their last game, they were playing the one undefeated team. Some of the kids (and the parents) really get into it. The story on the other team was that they started the season with no coach. When a local college player tore her ACL she volunteered to coach and the league assigned her to this team.

She was obnoxious. She was coaching a bunch of seven-year-olds like they were in college. I wanted to scratch her eyes out. Those poor little girls.

There was absolutely no score after the first quarter. Our kids were playing nothing but defense. I thought the other team's coach was going to pop a vein in her head.

In the last quarter, I think the score was 10-1. My daughter (who loves to play defense because she doesn't have to run as much) was finally playing up. And I did something I never do.

When the kids were walking back to the middle after another goal, I yelled out my daughter's name. When she looked, I said, "Come on, Honey. You can do it." She smiled at me.

Moments later our girls had a throw in. My daughter quietly faded back toward the goal. Her teammate hurled the ball over the defenders' heads. My daughter controlled the ball, turned, and shot past two defenders into the net.

My whole family jumped up screaming. So did all of the other families. These parents have known (and loved, if I do say so myself) my daughter since she was a tiny preschooler. They knew she'd never scored. They were more happy for her than they were for their own kids to win the game.

She barely reacted. Her friends hugged her. One head-butted her. And they ran back for the next face-off.

On the very next possession, she had an assist.

And on the next possession her friend passed it to her right in front of the goal and she scored again.

Four years of nothing, and within two minutes she scores twice? That is so typical of her.

After the two teams shook hands, all of the parents went out on the field and hugged and congratulated my kid (and us too). It was sweet. She's just the kind of kid who is so sweet, polite and happy that other people love to see her succeed. I was unspeakable happy for her.

We let her choose a restaurant for dinner that night. She called my parents and told them all about it.

When we were alone later, I asked her if she had just decided to score. I was wondering what was so different for her this game. It was like she had found the Eye of the Tiger.

"My coach told me to score," was her answer.

Oh, okay. Is that all it takes?

My husband laughed and said, "We tell you to score all the time. Why would you listen to your coach and not us?"

"That's not true," she told him. "You tell me to have fun and get good exercise."

Maybe we should have bribed her for goals four years ago.
Posted by Tuna Girl at 1:15 AM