Our Time in New York

Fifteen minutes ago, I dropped the kids off at school. And thirty seconds ago, I got out of my van, stood on my front lawn, threw my arms to the sky and stretched!

Our trip to New York was great. Sadly, my husband wasn't able to join us because of work, but we were so busy there, and he was so busy here, that we barely had time to miss each other. But shepherding two kids around the Big Apple can be a daunting task. Thank goodness for Uncle Patrick. 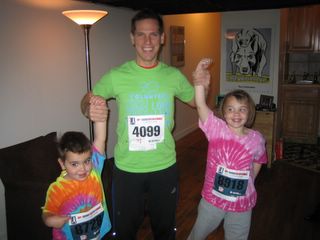 Sunday was all about the Race to Deliver. My son was a little nervous while we were waiting to start. He kept telling me he was scared. But when the race organizers walked us out to the start point and I pointed back to the finish line, he exclaimed, "Oh! That's easy!" and his nerves were gone. Though he was confused by all the adults at the start, once he started, he loved it. He ran with a big smile on his face. He got his ribbon at the finish line, and I've never seen him so proud.

My daughter had the exact opposite experience. Uncle Patrick took her to her start line. He told me that she was really excited and into it. And she started with a smile on her face. By the time she crested the hill before the finish line, she was behind the pack. We don't have hills here on the bayou. She was getting that distressed look on her face that I know so well, but she wasn't stopping. But that face made some woman jump out of the crowd to run with her. Which embarrassed her. And she started to cry. But she didn't stop. She just cried all the way into the finish line.

Between me, Patrick, and Jase we convinced her that by not stopping and finishing the race, she did awesome. I also had to assure her that she was the youngest in her division and probably the only first-time racer. Once she got her gift bag she was back in good spirits and ready to run more races here at home. Everyone has to start somewhere. Oh! But I'm in trouble for not starting her racing when she was three-years-old. Only my kid.

The important thing is that the kids helped Patrick raise $535 for God's Love We Deliver. Thank you so much to everyone who supported us. Patrick and Jase's team raised $1978.99 and the kids learned a valuable lesson about charity. Extra special thanks go to Marc and Jess for their very generous contribution.

After the race we had a huge brunch at Fred's then headed back to the park. We explored Belvedere Castle and let the kids play at Heckscher Playground. We saw the statue of Balto, rode the carousel, and skated at Wollman Rink. We stopped off at Artie's deli on the way home and crashed for the night. 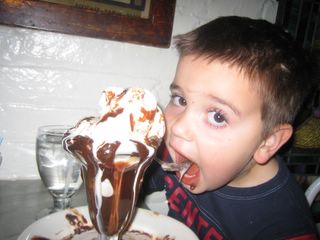 Monday was work day for Uncle Patrick. So I turned on PBS and slept in a little while the kids vegged out. Then we met up with Patrick for lunch and dessert at Serendipity. The kids had read about the famous Frozen Hot Chocolate, but decided they'd rather have sundaes instead.

But there was no way we were going anywhere else before my son got a chance to ride on the Roosevelt Island Tramway. Patrick headed back to work and we headed toward Roosevelt Island. It didn't occur to me to take pictures there.

Then we headed toward Fifth Avenue. First we headed upward to the Top of the Rock where the kids were more impressed by the elevator ride than the view. They were much more impressed with Build-a-Bear workshop. And because I and my wallet are gluttons for punishment, we braved the crowds in Times Square and went to Toys R Us. After riding the Ferris wheel and letting them pick out $20 worth of toys each, I practically ran out of there and down the steps to the first subway station I could find. Dinner that night was bananas and popcorn, because I am Mother of the Year. 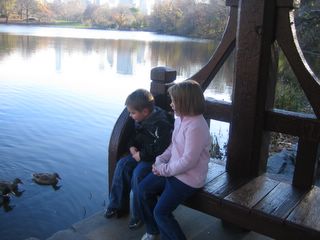 My daughter kept reminding me how much she likes science, so after violin practice on Tuesday we visited the Museum of Natural History. They comp the suggested donation if you show a military ID. Yellow school busses circled the entire block and I have never been so overwhelmed by other people's children. It was a good thing Uncle Patrick was working. We blew through there faster than the kids realized. After a quick lunch, we headed back to Central Park.

It is the simple things that kids often enjoy the most. I sat on a bench in the Diana Ross playground and watched my children play on a tire swing for almost an hour. Then we enjoyed a leisurely walk south over Bow Bridge and past Bethesda Fountain. We found Balto again then enjoyed the Central Park Zoo and Tisch Children's Zoo until they closed. The zoo in central park is tiny but it was perfect for two little one's who are just waiting for Uncle Patrick to get off work.

While we were waiting for Patrick to walk across the park we found a perfect little playground near the zoo. It had the coolest slide built right into a hill. I have a feeling that when they think about their trip to New York years from now, their fondest memory will be of playing on that slide until dark.

Because Uncle Patrick is the coolest uncle ever, he took us to FAO Schwarz where the kids got to play on the giant keyboard. After my daughter drooled over the costumes, and my son drooled over the Thomas trains we headed to Union Square for dinner at the Chat 'n' Chew. We took a cab home, because the kids had been dying to take a real New York taxi ride. 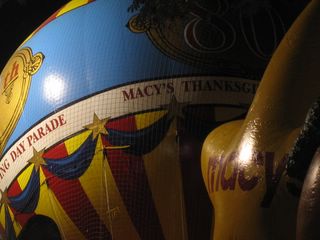 On Wednesday morning, Uncle Patrick was my savior. He took the kids out for breakfast and let me sleep for an hour more. Ah, sweet, sweet rest. Then, because I figured it was time to send Uncle Patrick out of the frying pan and into the flame, we visited the Children's Museum of Manhattan. Good sport that he is, he accompanied my daughter to a basket making class where she spent most of her time. I just followed my little boy around and watched him try to make friends.

Then we headed to Times Square again, (What were we thinking?) where we were the very lucky recipients of a backstage tour of Spamalot. I'm trying not to think about what payment Uncle Patrick has to make to his friend for that favor. The kids were more impressed than I thought they would be. My daughter started to dance and my son started to sing. But they don't quite get the significance of standing on a Broadway stage. As my daughter said, "I perform on stage all the time, Mom. What's the big deal?" I think someday she'll appreciate it.

We had dinner that night at Dave & Buster's where the kids had a blast in the arcade. And Patrick beat me at air hockey. But my high score at Skee Ball was 240 which I think beats him. So it's okay.

On the way home, we walked by the balloon inflation area for the Macy's Thanksgiving Day Parade. That was very interesting. Especially when we saw that the balloons all look like they are assuming the position. By then it was starting to rain and we were very happy to get home to Patrick's apartment. 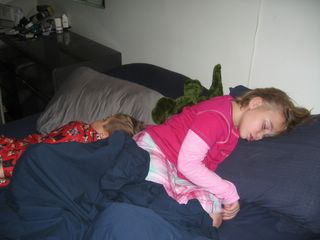 Asleep at MAK and K's

We woke up to pouring rain on Thursday. We had planned to get up early and stake out a good spot on the parade route. But our late night and the cold rain changed our plans. We stopped for hot coffee and made our way down to 75th Street. We were more than a dozen deep in the crowd, but after Uncle Patrick's shoulders got tired from holding the boy, the lady in front of us offered to let the kids stand on her step ladder. Who says New Yorkers aren't nice?

When it started to really pour, it was pretty easy to talk the kids into heading home to Patrick's warm apartment and watching the parade on TV. By the time we got home, the parade was just reaching Macy's and we watched the whole thing warm and dry in our pajamas.

We all went a little stir crazy on Thanksgiving Day and we were so thankful to head out to Queens for dinner at MAK and K's with a bunch of their friends. We had a wonderful dinner and a great time. The kids loved MAK and K and especially loved snuggling in their bed and watching the Little Mermaid. We had a hard time dragging my sleepy kids home, but that night was the highlight of my week. I always love seeing MAK and seeing him hold my sleeping son just affirms that he is indeed the most adorable person on the face of the Earth. It's amazing how family can be made through this silly blogging thing. 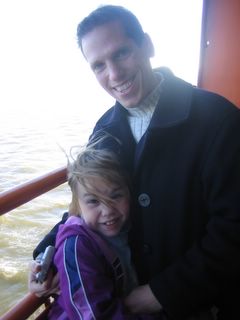 By Friday we had checked-off every item on the kids' New York To Do lists but one: a boat ride. So we headed to the Village for lunch at Peanut Butter and Company and then to the Staten Island Ferry. The kids were momentarily impressed by the Statue of Liberty (something I had been waiting 33 years to see) but then were distracted looking in the water. "Oh, look! A piece of wood! Hey! There's a cup! Wow! Medical waste!"

We then headed toward Chinatown for my daughter's favorite moment of the whole trip: seeing the tiny turtles for sale. She did everything she could to convince Uncle Patrick that we needed a tiny turtle. To no avail. But those kinds of crowds and a three and a half foot tall Tuna Boy don't mix, so before Mommy blew a gasket we found a subway station. We headed to Grand Central Station, mostly to use the restrooms, then to Times Square (again!) for dinner at Carmines.

Since we had to get up in the middle of the night for our 5:30 a.m. flight (Hey! I saved almost $1,000.) we put the kids right to bed and packed. Then Patrick and I cracked open a bottle of champagne (which I never spell correctly so I should just call it sparkling wine!), toasted a wonderful week and spent the evening talking. 3:15 a.m. came too damn soon.

In the car on the way to the airport, I asked the kids what their favorite part of the trip had been. My daughter's favorite was Chinatown. And my son's favorite was riding the subway. He could have happily ridden the trains all day long. And by the end of the week, he could probably navigate them better than me.

For me, my favorite part was having Thanksgiving dinner with friends. But I also loved that Patrick and I got to spend our evenings quietly talking and enjoying each other. It was nice to have that time together. Having a best friend who lives so far away is hard. But having this time together makes it easier.

More of my pictures are here.
Posted by Tuna Girl at 9:09 AM