All I Got for Cristmas...

...was a Coach bag and a new cell phone and new cell service. Oh, and TiVo, oh my!

We had a nice Christmas. I know it kills my mother, but I much prefer spending our holidays in our own home, just the four of us.

Years ago, we had agreed to go "home" for Christmas every other year. But I have zero desire to travel to Boston for the holidays and we've just stopped going back since, oh, about 2004 (I think). I know that's hard for my parents to understand, especially when my husband is deployed. But I'm 35-years-old. My kids are seven and nine. We have our own traditions now.

Besides, we see them for at least a couple of weeks every summer. (Of course I have no desire to do that this summer, but shhhhhh. Don't tell anyone.)

So, Santa brought the Little Tuna Girl an iPod, against mom's better judgement. She's busy filling it up with classical music so what can I say.

Santa brought the Little Tuna Boy a whole mess of Legos. We now have Lego stations all over the house. I definitely need to clean and organize the kids' toys to fit all the new ones in.

Santa *ahem* also brought the kids *ahem* a Wii also very much against mom's better judgment. I seem to remember an agreement with Santa *ahem* years ago that we wouldn't have video games in the house. I guess Santa just couldn't resist bringing it for the kids *ahem*. Yeah. For the kids.

I already hate that damn thing. It's turned me into the bad guy who has to say, "Enough with the Wii. It's time for a bath (or bed or dinner or whatever)." I hate video games. Go read a book. Or play outside. Blah.

I think the Wii might go away in a drawer once the kids go back to school.

It's funny. After just a few days the kids were sick of being off. They miss school. They miss all the stuff they do. They're bored.

I'm counting down the days until school starts again. Seven to go. Then I'll take a couple of days to be blessedly alone. 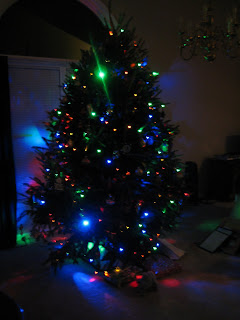 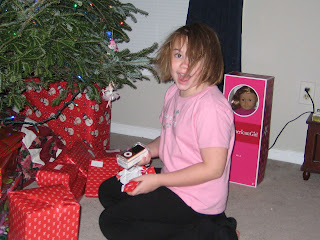 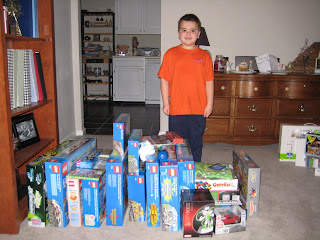