My daughter has been playing soccer for two years. And in those two years, she has never scored a goal. Never.

She is the only one on her team who has never scored a goal.

Now I should mention that it doesn't seem to bother her too much. She's busy picking flowers after all. But she does want to score a goal.

Yesterday was our last game of this season. Since it is Spring Break and a holiday weekend, very few kids showed up for the game. So my little soccer star got to play for all of the first three quarters.

When the coach sat her down at the end of the third quarter, I have to admit that I was depressed. Two whole seasons and not a single goal to show for it. She was fine with it, but I knew how happy she would have been to score a goal.

With about two minutes left in the game, the coach (AH's husband) asked my future World Cupper if she wanted to play again. Miracle of miracles, she said yes.

So she went out on the field for a kick off.

I looked away for a moment to tend to my son, and when I looked back up I saw her boot the ball so hard off the kick-off that it rolled right into the goal.

I was admittedly happy. Really happy. She jumped up and down a couple of times, yelled, "I scored my first goal!' and went right back to the center for another kick-off.

But the crowd was going wild. The other parents had been rooting for her all season. Woo hoo! She did it! She scored a goal.

And then the coach sort of walked toward me. And I began to feel that something wasn't right.

"Please let her believe she scored a goal," I implored him.

He kind of laughed and said, "It's fine."

So the other team took their turn to kick off and we ended up scoring again.

Now I should mention that we don't keep score yet at their age level. Not really, anyway. So whether or not she really scored really doesn't matter. But I'm too much of a competitor myself not to feel like it really didn't count.

After the game, the coach of the other team made a point to come shake my daughter's hand and tell her that she scored a beautiful goal.

"Thank you, ma'am," my little future Olympian replied. It was pretty cute.

To celebrate her big goal, I let her choose the restaurant for dinner, and I let her order dessert. Everyone we came in contact with for the rest of the day--the host, the waitress, strangers in the parking lot--they all got to hear about her "game winning goal."

I've never seen her quite so proud or happy with herself. But every time I look at her I have to chuckle. My little audacious one who kicked the ball when it wasn't even her turn. The same little girl who held the coaches hand through her entire first season. The same little girl who got sent out of the game for crying at least three times while my husband was here to coach.

It's hard to slide into depression when your daughter is just so happy.

Now my little Mia Hamm wants to go to soccer camp for the summer. She wants to play on an all-girls team next year. She wants to see if she can get a college soccer scholarship. She is the "best soccer player ever!"

Because she kicked the ball when it wasn't her turn.

I swear she gets it from her father. 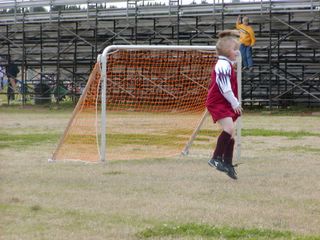