It has been said that the only way to judge a mother is by how much people enjoy being around her child.

If this is true, than Aaron's mom is a wonderful mother indeed.

I was privileged enough to get to meet Aaron in person. And I was lucky enough to spend some time just talking with him. And in those conversations it became quite clear to me that Aaron and his mom have a really great relationship. I can only hope to be that close to my son when he is an adult.

My daughter has a special place in her heart for Aaron. She talks about him a lot and asks me a lot of questions. One thing she wanted to know was what Aaron liked to do.

Well, man. I could have gone on and on with that one. But I decided it would be safest to just tell her about his photography.

That may have been a mistake, because now both kids want to take tons and tons of pictures. Between my digital and the throw-away cameras my mom gave them for Christmas, I have enough kid-taken pictures to fill a couple of albums.

Here are some of their efforts. Do you guys think I have a couple of future Aaron Edwards on my hands? 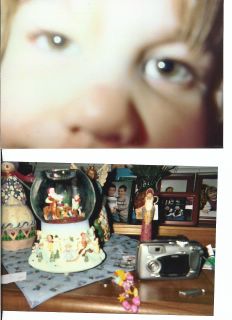 Okay. So maybe future Aaron Edwards they are not. (And someone is in big trouble for taking that picture of me still recovering from surgery.) But I did come across a few gratuitous crotch shots taken by my son.

Maybe he is going to take after Aaron after all.

And that would be okay by me.

So, happy birthday to Aaron's Mom. And thank you so much for Aaron. We appreciate him.
Posted by Tuna Girl at 10:03 AM